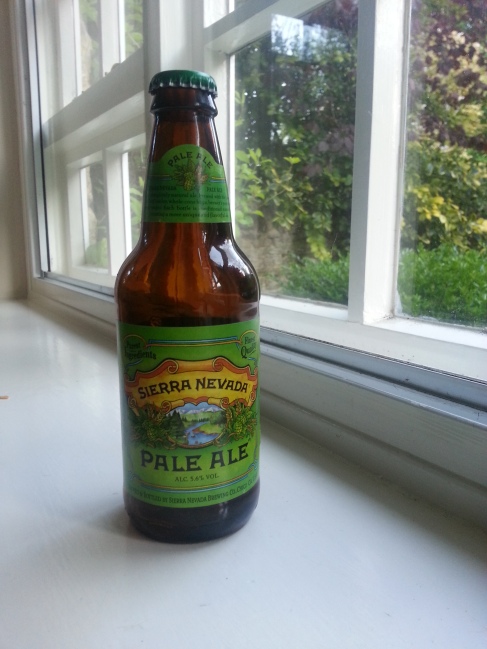 Strange to think that the entire modern craft beer movement apparently stemmed from Sierra Nevada Pale Ale and even though Sierra Nevada brews somewhere near 800,000 barrels of beer a year (2010) it’s still thought of as a “micro” brewery; which, when compared to a company like Budweiser, I suppose they probably are.

Sierra Nevada have been producing their pale ale – currently the second best selling craft beer, and by a country mile the best selling pale ale, in the US – since 1980.

Straight from the bottle, the beer pours a clear heather-honey colour with a more than healthy effervescence, that brings forth a summer cumulus head.

The aroma that comes through is ozoney, fruity, honeyish and mellow.

Taste-wise, as the effervescence has broken over your tongue it leaves warming notes of malt and alcohol; which, at the  swallow, are supplanted by a smooth bitterness – thanks to the 37IBUs of early kettle hops -followed by a long-lasting finish of fruitiness and honey from the late hop additions, which I believe to be Cascade.

SNPA is by no means in the over-the-top hopped American craft IPA category, as it’s a pale ale…but it’s just as satisfying, only in a more restrained and self-assured way.

All round it’s a great beer – one of the classics.  Once you’ve tried it you’ll understand how the likes of Goose Island, Dogfish Head, etc. came to be.

I, rather ashamedly, bought my bottles from everyone’s favourite monopolists: Tesco for £1.79 for a 350ml bottle.