I know, I know.  It’s an awful name.  But I’m tired and I’m not feeling very imaginative.  But given a two hop brew what more can you do?

Fortunately when I concocted the actual recipe (below) I was feeling imaginative!

Maltwise, I wanted to use Belgian pale malt for the distinctive malt character that it would impart, as opposed to something like Maris Otter, which I didn’t think would be entirely appropriate.  I wanted to get a little extra in the mouthfeel so I thought I might give the old Vienna malt a whirl, too.

Hops-wise, and this being an American IPA style, it had to be big and punchy so Chinook for bittering and aroma, backed up by masses of Amarillo for taste and aroma.

For yeast I went with US-05 as it gives me just the right sort of clean flavour profile…i.e. not too much character, leaving plenty of spacefor the hops to pop. 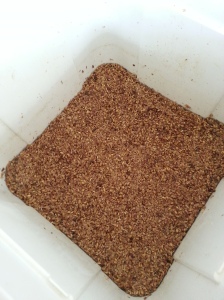 Got the mash on at lunchtime that eventually yielded about 8 litres of beautiful smelling wort, and after a couple of 10.5 litre batch sparges I eventually ended up with 28.5 litres of wort of about 1055 SG, after boiling I was hoping that this would be somewhere around 1058 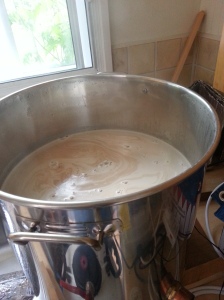 The boil went on at 8.20pm with the first hop charge, and the subsequent charges followed according to the recipe.

The cooler went on at 9.20pm with the last hefty hop charge of 25gm Amarillo and 10gb Chinook.  The beer was cool enough to get into the ferementer at 10pm and was a healthy 1059 SG (all being well this should come out at about 6.2% ABV after fermentation)

It’s now merrily bubbling away at a nice 18C in my spare room.  Soon I’ll be hitting it with a generous 25gm dry hop of amarillo which should spice things up nicely.