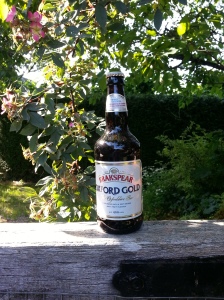 There’s no denying it…I’m a big fan of Brakspear beers, that’s not only because they’re based in Oxfordshire, it’s also because they brew beers that are solid, tasty and enjoyable.

Oxford Gold pours a baled straw colour with a not-ever-so-long lasting head.  Not a strongly aromatic beer, but does hint at pleasant notes of sweetish malt, caramel and summer fruits.

This is not a particularly bitter beer, but in it’s taste is a rich undercurrent of malty sweetness with hints of the same caramel and berry fruits that you get coming through in the aroma.  The mouth feel is velvety and sumptuous and the aftertaste persists for quite a while and again echoes those fruity, caramel and a distant, almost creme brulee, flavour.

Normally I wouldn’t go mad for a beer that doesn’t have much in the way of bitterness on it’s leading (and trailing) edge, but in this case because Oxford Gold is so well made and because it matches up all the way through from first sniff to the long aftertaste I think it’s a winner.

If I could do it again, and believe me I will, I’d serve it a smidge colder…but that’s my fault for not chilling it enough…

I picked this up from Asda as I happened to be going past.  It was on a three for a fiver deal.  There you go, Asda, I’ll happily give you my address for you to send freebies to…soon I’ll be visiting Lidl to see what they’re peddling in the way of beer.  Really.  Send me free things to stop that happening.