Ah Sourdough.  The king of breads.  There’s nothing quite like its huge, chewy, delectable flavour.  Unfortunately it does take a heck of a long time to prove and can be be a bit a nightmare to shape…

Eve has this great method for getting a lot of that sourdough taste and chewiness in way less time and with much more of a rise!

Before we get to that we need to deal with getting the starter together:

Get a reasonable handful/cupful/half-a-mug-full of unbleached wholemeal flour – organic if you can; apparently fresher is better as this increases the chances of there being some good viable wild yeasts contained within it.

Add some tap water to the flour and combine until you get a sloppy mixture the consistency of thickish double cream.

Now beat the daylights out of the mixture with a whisk…you’re looking to really aerate it, this will give any yeast present the air it requires and also brings in any airborne yeasts that happen to be floating about.  Lastly put a couple of unwashed grapes into it…grapes are notorious harbourers of wild yeasts, so we’ll have some of that thank you very much.

Pour/spoon the mixture (and grapes) into a jar and cover with cling film/saran wrap -or whatever it is you know it as- and leave for 48hours.  Do check on it from time-to-time – Eve put this starter in a coffee jar, forgot about it for a bit and things went a bit awry: 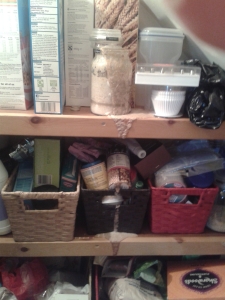 After 48 hours (shorter if it’s warmer, or longer if it’s colder) you should see some signs of activity and evidence that some yeast has taken and is working, normally that’s some largish bubbles on the surface – like this… 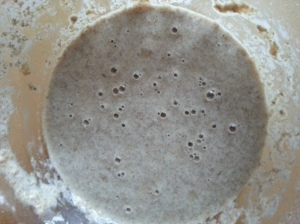 …and a strong yeasty/sour smell.  Don’t be put off by this.  Although if it’s really rank -and believe me you’ll know when it’s off; the smell of dying yeast is unbearable- you should dump it, wash everything up and start again.

Assuming that everything is OK, you should divide the mixture in half and discard one half (plus the grapes) and make the volume of the remaining half up to a little more than where you were before with more flour and some water, this will give your little colony more food to eat.  Remember you’re still aiming for that double cream consistency.

You need to now halve and re-feed your starter every day for the next few days (about a week).

Once you’re up to a reasonable volume of starter, you can keep it in the fridge and feed it occasionally – that means you’re slowing the fermentation down a bit and can use it whenever you need to bake, being careful to replenish as you use it with more flour and water.

To make a hybrid sourdough loaf:

…and replace some of the liquid content with the equivalent sourdough starter.  That’s all there is to it.  It’s a guaranteed, dependable rise and has a really lovely sourdough flavour….