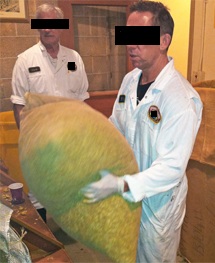 “Should be good for a 5 gallon brew“
(Is there no end to these people’s hop lust?  Someone must stop them*)
.

The old dry hopping thing is a bit of a nightmare, isn’t it?  Should you dry hop in the primary?  Or transfer the beer to a secondary, so it’s off the trub and dry hop there?  Should the beer be clear before you dry hop?  Does it even matter?  Does it ruin the clarity?

I must confess that clarity in the finished beer seems to be my biggest problem…all my beers seem to take weeks to clear.  Admittedly this is probably due to the extraordinary amount of dry-hopping I do, but I suspect that also having nowhere to crash-cool after fermentation always tends to leave some yeast floating about.

For the Chimarillo IPA that’s currently on the go (https://yeastismybitch.com/2013/06/20/home-brewed-chinarillo-ipa/) I just dry-hopped in the primary and bunged it in a cornelius keg when it had finished fermenting…my next beer, though, I’m hoping will be dry-hopped in a subtley different way…

Now, keg hopping is not a new concept…think of those barrels of IPA going across the seas to the colonies all that time ago, but I have heard it said that keg-hopping can sometimes lead to a grassy, overly-vegetal note in the flavour of the finished beer because the hops remain in contact with the beer for too long.

I intend to limit any grassiness by attaching the mesh bag full of hops  to the very top of the dip tube in the cornelius keg – meaning that the beer will get dry hopped during the time it takes to drink the first quarter or so of the keg, after which the level of beer will drop below the hop bag, thus avoiding the potential over-exposure problem.

Have you had any success with keg hopping?, have you any tips and tricks that you’d like to share with us all?

(* I “borrowed” this picture.  If it’s yours and you want me to take it down I will.  If it’s you in the picture, write to me and tell me -graphically- what sort of kick you get out of handling that quantity of hops.  It’s must be like fifty shades of green…filthy)