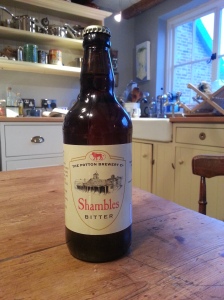 On our way to Suffolk we pass through Bedfordshire on the A14.  We always seem to say to each other that it always seems a bit hum-drum and unexciting, as we zip through…

(If you happen to know of any enthralling facts about Bedfordshire then feel free to let me know/put me right.)

Thank god then, that Bedfordshire has at least got The Potton Brewery; that fact alone piqued my interest in the county no-end.

My father-in-law and I shared a bottle of Potton’s “Shambles” bitter.  I suspect that there’s some quirky or funny story about why they called it “Shambles” but I couldn’t find any anecdotes on their website to that end…

Shambles pours the colour of old cognac; this -coupled with the complete lack of any lasting head- could make you look to the uninformed like a serious top-shelf drinker if you were to stand about with a glass of it for any length of time.

There isn’t a vast amount in the nose, but what there is is honeyish, calvados-like and bursting with crystal malt.  In fact I’d go so far to say it’s a bit malt heavy.  There’s no real hop aroma, but this is a bitter so that’s to be expected.

In the taste I got a fairly light maltiness, which was quite unexpected given the promise of crystal in the aroma.  The mouth-feel was quite thin and reedy too; which could mean that either the yeast did too good a job eating up all the available sugars – or the mash temperature was on the low side.

(I’m not even going to suggest that there was any brewing sugar involved…but if there was that would explain a lot.)

Also In the taste was a really odd background flavour that I couldn’t place…I’ve no idea what it was, it wasn’t unpleasant…it was just odd…

There was a decent enough bitter trailing edge after the swallow, but not enough to enthrall or satisfy.

All-in-all it was an OK beer and as far as parallels to my current exposure to Bedfordshire, it was pretty the same: being slightly hum-drum and unexciting.

I suppose that’s the trouble with running a blog like this is that you hope every beer is going to be exceptional, it’s a shame that Shambles wasn’t…maybe Potton’s other beers are?