I have, you know…I’ve only gone ordered myself a 20 litre Speidel Brewmaster yesterday…

(See my previous agonizing on a Brewmaster purchase here: https://yeastismybitch.com/2013/08/09/speidel-brewmaster/)

Oh Lloyds, my dear bank account, will you ever forgive me?

My wife has…but only by promise of a trip to Hatton Garden for something sparkly…she has also just successfully borne our second child too.  For bearing our first I bought her a chicken house (not to keep the child in, you understand.)

Back to the Brewmaster…do you mind me calling it a Brewmaster?  It sounds less teutonic*, uptight and haughty than “Braumeister”, doesn’t it?

(*not that there’s anything wrong with Germans, Germany or anything like that, I just think “Braumeister” sounds affected and poncey.  A bit like when people say ‘erbs instead of herbs when trying to be posh.  I’ll stop going on about it, now.)

I placed my order with the good people at Vigo ltd.  They seem to be the sole importers of Speidel kit in the UK, and also sport a very comprehensive line in other drink production/brewery equipment: fruit-stoning machines, cider presses, bottling machines all that sort of thing.

If I ever go the microbrewery route I know where I’ll be buying my bits from.

In the course of my conversations with Jon at Vigo I mentioned this blog and he offered to chuck in a free thermo-jacket for the Brewmaster, so that was nice of him.

I think what really sealed the deal is that they are quite the cheapest stockists of Speidel kit in the UK and they also carry a lot of it as stock…a lot of other re-sellers have to order it from Speidel in Germany which adds to the agonising wait time.

When placing my order I was told by Michelle at Vigo that the lead time on delivery is three days.  I hope this means I get it before the weekend – as that means I’ll be able to to brew!  Keep an eye out for the recipe – it’ll be a Chinook and Cascade IPA.  Get on!

Full report on packaging, delivery, the machine itself will follow in due course.  So far the experience of ordering with Vigo has been a very positive one.  If you’re in the market for Speidel (or even a new bottling plant!) you now know where to go:

The BM arrived, beautifully packaged and in fine fettle on the Friday.  See pictures below (it’s soooo shiny): 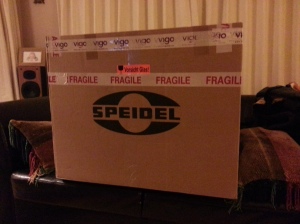 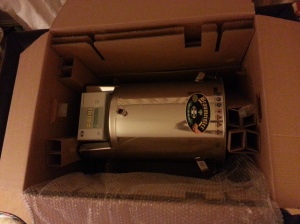 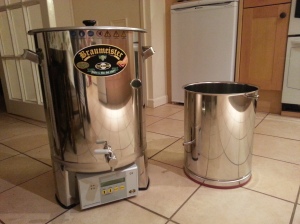 2 thoughts on “Speidel Braumeister: I’ve only gone and done it… (UPDATED)”