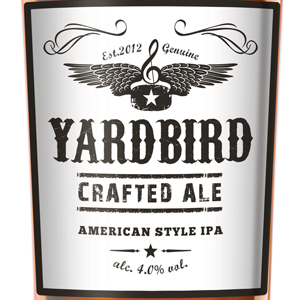 Simulacrum.  There’s a word to chew on and one you don’t hear every day.  It generally means “a vague, possibly unreal, representation of something”

My wife magicked up a bottle of Yardbird “American Style IPA” from Budgens in Woodbridge when we were in Suffolk a while back.  As soon as I saw it I was looking forward to trying it.  I don’t usually go a whole bundle on Greene King beers as a rule – but an interpretation of an American IPA?  This I had to try.

The bottle.  Let me tell you about the CLEAR GLASS bottle that Yardbird comes in: so, GK have produced a supposedly crafted American IPA with potentially tons of hops, so why in the name of all that’s holy would you put it in a clear bottle?

Sunlight will skunk/cheese any hops oils present in the beer in no time and render it awful.  I’m too annoyed to write further about it, so you’ll have to read more here: http://www.livescience.com/33718-beer-skunks.html

Newcastle brown can get away with clear glass bottles as the hops they use are primarily for bittering and not aroma.  Newky-brown is definitely malt-led

Yardbird is browney-bitter coloured, which is unusual for a craft IPA.  Upon pouring I didn’t get much hoppiness in the aroma at all…in fact I got the minerality and malty-hoppiness of a fairly standard ale or bitter…It smelt a bit like Abbott ale or bulk standard Greene King IPA.  Very odd.

The taste is nothing, and I mean NOTHING at all like any craft IPA I have ever tried.   To my mind in no way, shape or form is this a representation of the style.

But…  (he tailed off, mysteriously…)

It may not be an American IPA (or anything like it), but it is very, very drinkable indeed.  Even for all of its shortcomings in the style department I enjoyed it a lot.  If GK just put a different label on it and called it an ESB they’d shift tons of it.  It’s got a good hopping regime attached to it, and a superb bitterness…

So there you are.  If you see it, buy it…just close your eyes when you open it, pour it out with your hand over the label, throw the bottle away and enjoy a really lovely pint of ESB (or something else along those lines…just not an American IPA)

And don’t whatever you do let the chorus from “For your love” enter your mind as you drink…you’ll never be rid of that refrain.