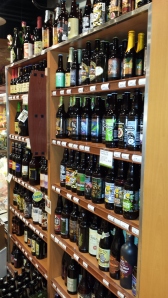 Look at it. LOOK AT IT. This is just the selection of beer in a smallish grocers in Ohio…

Now I’ve been back for a few days, I’ve had a chance to reflect on the differences between the UK and those folks who talk kinda funny over there in the US

Now I’m not criticising our UK beer culture here, far from it.  I’ve grown up on it and I love it.  I just think that as we move to an inevitably more crafty position, we could take a leaf out of the US’s book and apply some of their methods…what do you think?

I only had a week out there and the above is what I noted, maybe you have a different angle on the whole US/UK beer scenes..?