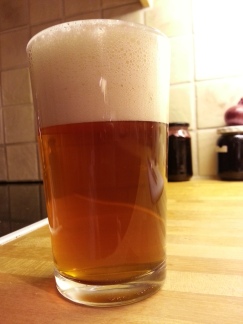 Phone cameras give such an interesting perspective on things, don’t they?  This is a standard half-pint glass…really.

How remiss of me…here I am with a keg of my IDPA (https://yeastismybitch.com/2013/09/04/chinook-and-cascade-indian-dark-pale-ale-idpa-on-a-braumeisterbrewmaster/) and I didn’t ever get to record my thoughts and tasting of it…well it goes a bit like this:

IDPA is quite a dark copper orange with a little keg-hop induced haziness, the head is thick, long lasting and leaves delightful lacing all up the glass.  This is a very vigorous headed beer and I think that’s a lot to do with the keg-hops providing a nucleation site for dissolved CO2 in the beer…

From the aroma I got strong floral hops, with some side-maltiness that combines to suggest a theme of candied orange peel…which I would have expected when hopping with something like Amarillo, but as this is Cascade and Chinnok I’m a bit surprised.

The aroma produced by the keg-hopping is nowhere near as vibrant as it was, but it’s still there and it still makes me want to drink it.

A sip gives a solid up-front bitterness that arrives at the same time as the hop flavour – which good and kinda how I planned it.

I must confess that the mouth-feel isn’t quite as firmly malty as I’d hoped it would be, so maybe I shouldn’t have trimmed down the Vienna malt as much as I did…

All in all, this is a damn fine beer and pretty much as i wanted it to be, but I think too many excellent US IPA tastings on my recent trip abroad have left me with higher standards?