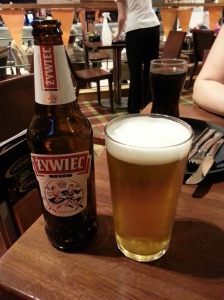 …at least that’s what the folks depicted on this beer’s label appear to have been told.  They’re Krakowiacing like it’s going out of fashion.

I got an opportunity to try Zywiec on Friday lunchtime after a family trip to the photography studio, when we dropped into Amber Cafe Bar in Evesham.   Amber’s food was kind of OK: cheap and utilitarian but not bad in any way…their beer selection was poor: too much generic fizzy keg stuff; so, something seemingly obscure and in a bottle seemed like the best compromise.

Zywiec is a pale polish lager, and by all accounts is one of the most popular beers in Poland.  The Zywiec brand itself is owned by the Heineken juggernaut, so make of that what you will…

Zywiec arrived a typically pale lager yellow and with an extraordinarily dense head of very fluffy white foam.  I’d love to wax lyrical about how the lagering process and locality of the brewing water go to making great head retaining proteins from the malt but I’d be talking outside of my immediate knowledge and also roundly out of my arse, so just take my word that it’s a good dense head…

The aroma was all spicy euro hops and sweet malt with a breezy ozoney edge to it.  The taste was weirdly “tangy”, lightly malty and with a perfumed lilting accent.  The bitterness arrived at the swallow, accompanied by a faint residual sweetness.

I guess I kinda liked this, but it’s not very complex.  It’s obviously meant to be clean and fresh – being a lager – and that’s just what it is, but I do think I’d like a little more rounded malt in the flavour.

All in all: drinkable, but not exciting.  Have a go, it’s always very reasonably priced and is waaaaay better than the usual generic urine the seeps out of the taps of many-a-pub and bar these days…

(which is all in Polish, as the English language version was blocked by Google as a security risk…no I didn’t know that they were the arbiters of gustatory taste, as well as taste and decency…)