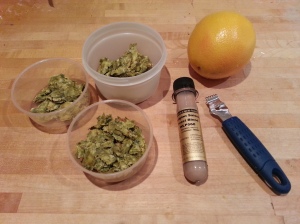 If you were a teenager in the early 90’s in the UK then you’ll probably remember Vic Reeve’s Big Night Out.  I do.  Fondly.  One of the skits (Novelty Island) featured Vic’s nemesis: Graham Lister and his wooden seagull known as Simon the Seasonal Sea Bird – who could predict the seasons by various technologies hand-crafted into him by Lister.

You had to be there.  Really.  If you must see and understand it go here: https://www.youtube.com/watch?v=XtdJh7T49-o (about 5mins in)  I can’t think of Saison without thinking about that seasonal sea bird…

That’s how the name came about – what about the recipe? 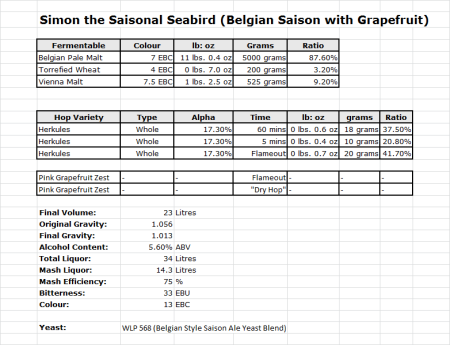 (Ignore all of the talk about mash liquor if you’re using a Braumeister…just put about 26/27 litres of water in and let it go through a fairly simple mash schedule, like this: https://yeastismybitch.com/2013/11/12/homebrewed-thornbridge-kipling-clone-braumeister-version/ and sparge with 4 litres of 79C water)

When adding the grapefruit zest at flame-out, there was a really lovely fizzle sort of noise as the citrussy oils were liberated – and the room was filled with a gorgeous peppery-grapefruit aroma.

In the end I managed to squeeze about 23 litres of 1059 gravity wort out of the Braumeister and into the fermenter.  I did think about banging in 500g of light Muscavado sugar, but decided against it as the mash efficiency was good and the yeast should tear through it.

I tasted a small amount as I was running the wort out into the fermenter and it was really good – a light bitterness with a nice malty note and a lovely grapefuit-peppery, fruity, after-taste.  I’m hoping that the “dry-hop” of another grapefruit’s worth of zest will add an even fresher layer on top.  I don’t want the grapefruit to dominate, though, as I want that WLP568 yeast with it’s really peppery phenolic and fruity theme to shine through.

If the yeast is half the monster it’s supposed to be, this should end up at 1007 or something – which could make for a finished ABV of 6.8%

I have high hopes for this one, as well as a good supply of half champagne bottles and 29mm caps to bottle it up with.

2 thoughts on “Simon the Saisonal Seabird: A Belgian Saison with Grapefruit”