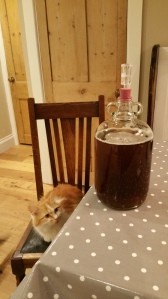 Stinging nettles.  They’re great aren’t they?  I mean who wouldn’t want to stumble and fall into a patch of the nasty little bastards? (if you need any further unpleasant connotations: apparently the Nazis used nettle fibres to make the thread that their uniforms were made from)

So let’s see if we can’t make something good from them, eh?

I took a myriad of online and old book recipes to come up with the following:

*Note that I say nettle “tips” and not “tops” – just take the top two leaves…it makes you feel a bit like a tea-picker – if that makes the back-ache seem any more bearable.  I also included the 100g of soft brown sugar for the colour and hopefully some unfermentable sugars or sweetness. 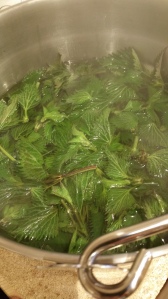 The method is simplicity itself:

I was lucky enough to be enjoying a boisterous ferment within 12 hours.

Then I thought I wonder how strong it’ll be? so I plugged 600g of sugar and 4l of water into Beer Engine and found out that the original gravity is probably about 1.056, and then realised with some horror that because it’s all sugar as the main fermentable and not malt, it’ll all ferment.

I’ll let you know a) how it tastes and b) how long it is before I become brain-addled on it and fall in a patch of nettles.