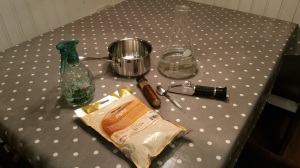 Honestly, officer, this is NOT a meth lab…

I’d always lived in fear of making a starter, thinking that it would all end up as a stinking mess.

Well, in planning for my next beer, I’ve been rather forced into doing it…

I’m planning to use Brettanomyces Bruxellensis Trois (White Labs WLP644) as the primary yeast, because it apparently produces excellent tropical fruit aromatics that age gracefully into a gentle background funk.

…trouble is, because Brett (hark at me!) is normally only used as a secondary yeast in sour fermentations, there simply isn’t the cell count in the supplied vial to carry out a primary fermentation*

So it looks like I’m stuck with trying to step the cell count up.

I took the white labs vial of yeast and pitched it into a sterlized conical flask – containing 500ml of boiled and cooled 1035 wort and, rather than putting it straight onto the stir plate, I’ve simply left it in a darkened cupboard at 20-odd degrees C and am regularly swirling it (for that read: when I remember to swirl it) 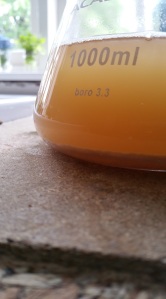 The result of just a little bit of manual swirling

Setting controls for the heart of the sun.

If this was normal brewers’ yeast I’d do exactly the same but only put it on the stir plate for 24 hours prior to brewing – brewers’ yeast multiplies a whole lot quicker then Brett and really likes the constant aeration of a stir plate all the time.

Apparently Brett gets over-excited when given too much aeration and can start to produce acetic acid when in the presence of lots of oxygen.  I’ve been told that if your starter seems vinegary you can still pitch it and that vinegar note won’t carry over to the finished beer.  If you’re afeared of doing that, just let it settle for a day and decant off the liquid and pitch the slurry from the bottom of the flask.

(PS: Yes, alright, let’s leave the whole “WLP644 is actually a Sacchromyces rather than a Brettanomyces strain” argument for another day…)