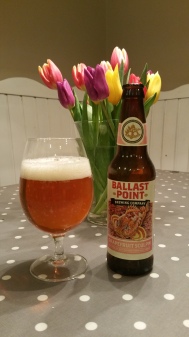 I know this might be a rather strong way to start a review, but:

GOD ALMIGHTY, THIS IS ONE HELL OF A BEER.

I know I’ve gone off of the deep end about certain beers before, but honest to goodness this is a truly great beer, and in this review I’m hoping to somehow, in however small-a-way, impress the greatness of it upon you…

In fact Ballast Point have made such a good job of brewing this, you needn’t bother reading the rest of my review; the time being far better spent trying to secure yourself a bottle or two…

A work trip to the AWS re:Invent conference just before Christmas meant that I found myself on a warmish Sunday afternoon shambling down the Las Vegas strip with my boss, you know, just taking in the sights after an hour or so of blazing away with large calibre machine guns and pistols (Battle Field Vegas. Go. Don’t ask. Just go.)

With the smell of cordite fresh in our nostrils we needed beer.

The liquor store beckoned (my boss always advises having a stock of beers in a hotel room…whether that’s for refreshment or just to stop his employees making too free with the company credit cards I’m not sure.  Either way it’s advice I never fail to heed)

Once inside the liquor store, I was staggered by the selection on offer.  So many beers, so many pretty bottles.  In the end, and having heard so much good stuff about it, I just had to have the Sculpin…this decision being helped in no small part by my boss sighing and leaning heavily on the counter while I ummed and ahhed.

Poured into a glass the upfront aroma is all fresh and zingy grapefruit rinds. There’s a lovely candyish marmalade note too. After that it’s hops, hops, hops! If I couldn’t have a bottle of Sculpin to drink, I’d happily settle for a whiff of the GLORIOUS aromatics instead.

When tasted, it’s full in body at 7 or so percent – which in my opinion is the sweet spot for this time of IPA.

Even at 7% ABV, Sculpin is as clean as a whistle…which is a good job because there’s an absolute ton of other flavour to come: a huge rush of zesty, pithy grapefruit and floral hops, LOVELY orangey maltiness , before the dank hops and laser-targeted 70IBU bitterness come to finish the whole thing off.

But wait! There’s a little grapefruit twang right at the end that makes your mouth run like a tap – which means you just can’t stop drinking.

I drank two bottles straight down – it really was that good.

But remember, you have to have this beer coolish – at least cellar temperature – there’s no point having it warm…it’s just not the same.

This is a GLORIOUS beer. You JUST have to try it. I doubt I’ll find equal or better for a very long while.

(I will make a clone tribute to this remarkable beer, just you wait…)