After a lengthy hiatus, I’ve finally got around to brewing again.

The Brewmaster/Braumeister kept casting me baleful looks as I passed, and in the end it was all too much to bear.

So what did I brew?

I need big IPAs in my life and one of the best, in my opinion, is Ballast Point’s Grapefruit Sculpin.  Ballast Point have recently been on the receiving end of some considerable earache for their merger/buyout by someone or other.

And by all that’s holy do I give a flying toss whether they’ve “sold out” or not?

I couldn’t give a tinker’s cuss. As long as they keep pumping out gallons of quality Sculpin, I don’t care.

I mean, I live in rural Oxfordshire, so it’s neither here ‘nor there to me…  They might as well be making this stuff on the moon.

Mind you, if it stops tasting good then I’ll just stop drinking it, No drama. That’s pure economics for you.

As I wanted my beer to be as big as I can possibly get it, I bought 6kg of grain and 200g of Falconer’s Flight pellets: I need my flavours to be distinctly “West Side” *makes W hand sign and feels distinctly like a dick*

Big citrus and pineyness are what we’re after here.

Oh and I used Magnum for bittering; for a grain bill this big we need considerable bitterness from the Magnum, with pretty much all the Falconer’s Flight at the back end, pulling the taste and aroma levers.

At the end of the boil, I cooled to 80C and dumped in my flame-out additions, letting the whole thing have a good half-hour hop stand while it cooled.

Grapefruit Sculpin (see my review here: https://yeastismybitch.com/2016/01/22/gorgeous-gargantuan-grapefruit-bpbrewing-grapefruit-sculpin-ipa/) is a cheery seven or so percent…and so is mine.  By some miracle of extraction I got 22L of 1068 wort into the fermenter and am hoping for a finish of 1009 or so.

Mind you, I’m being a bit careful to tame the West Coast Ale yeast by not fermenting above 17C; any higher than that and we’d get some yeast fruitiness, and this should be a clean beer.

After the krausen drops, I’m going to star-san a grapefruit or two and then zest them straight into the fermenter and then bung in 30 or so grams of FF pellets.

Then with six or so days to go I’m going to hit it with another 30 grams of pellets.

God, I LOVE getting hops into stuff…

When it eventually clears (and it’ll be a while I suspect), I’m going to bottle a fair amount and put some on keg – just for fun. 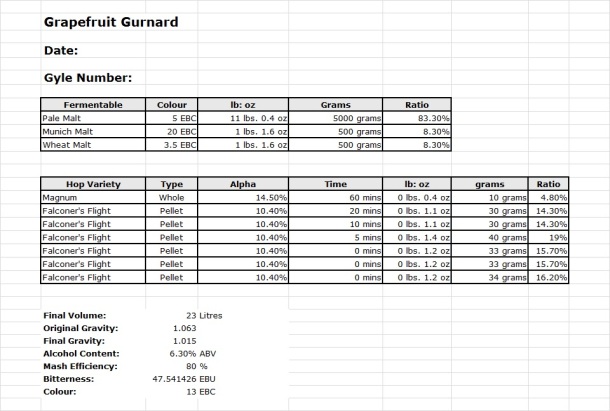 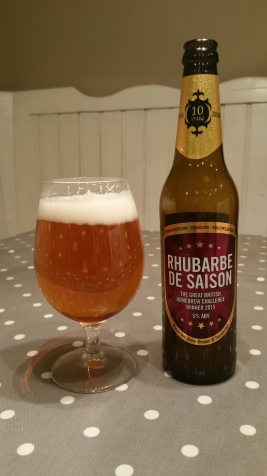 Ah, Saison…what a great style. I love a Saison, and I think we just don’t get enough of them in England.

So I considered myself lucky to get my hands on probably one of the last few remaining bottles of Rhubarbe de Saison, which was the 2015 Great British Home Brewing Challenge winning entry by Will Alston.

(I guess Thornbridge are slowly winding up production of this, in readiness for the next competition.?)

It’s be a shame really, as this is a great beer indeed. It’s novel but not gimmicky and is solidly satisfying.

Caution! The sediment in the bottle is probably the most clumpy, floaty, stuff I’ve ever come across…just the slightest agitation and you’ve got dear little fluffy clouds every where, but it does settle quickly – so that’s one thing at least.

The head is wondrous snowy meringue and the aroma is that of gentle fresh rhubarb, some Saison phenols and a great, almost raspberryish “pippiness”.

The effervescent nature gives this beer a real velvety mouth feel, over which floods a sharp rhubarb acidity (you know how that is…) followed by bone dryness – which helps to flush out more fruit complexity and further attic dryness.

It’s so dry in the finish that it makes your cheeks ache, but that only means your saliva runs more strongly and demands you drink more.

Well done Mr. Will Alston. I wish I’d brewed this…

(PS: I promise I will start brewing again soon.  I’m rapidly running out of stock and my wife is wondering what’s up with me…)