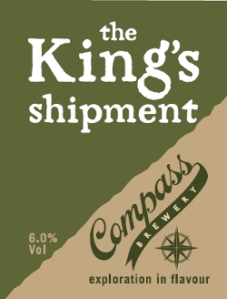 I’ve had this bottle of King’s Shipment in the fridge for a few weeks now, and had almost forgotten about it…but I’m so glad that I did remember it.

I was expecting great things as I dearly love their Isis Pale Ale, and was handsomely rewarded…

King’s Shipment pours a pretty glassful; bullion gold with a sprightly looking cap of dense foam on the top.  The head seemed to disperse and then magically reform again over the course of this beer, which was probably something to do with the heat, humidity and approaching storms of last night.

You don’t get a huge aroma, but it’s very nice all the same: malty and bready like a top quality sour dough with a sprinkling of hoppy enticement.  The taste is slightly sweet, nutty and biscuity due to extraordinarily well judged malt schedule…  Initially I thought I was also getting a Vienna/Munich malt influence through in the taste; but was sure that there was something else, something that I couldn’t quite put my finger on…a kind of rounded creaminess that rode alongside the sublime bitterness and flavour…

I had to go to the Compass website to find out what was going on.  It seems that in order to mimic the character of the old IPAs (i.e. stored in oak barrels) they’ve added oak chips along with the dry hops, which explained a lot…what I’d been tasting was probably Vanillin (the main flavour compound that makes up the taste in vanilla beans), which is produced as some of the Lignin in the oak chips is converted by either toasting or charring; which, as far as I know, is how barrels were prepared in the old days.

Now don’t go thinking that this makes the beer taste like custard because it doesn’t, from my point of view it just adds a little subtle background note that seems to tie all of the other beautiful constituent flavours together.

Really folks, this is one of the best beers that I’ve had in a very long time.  You just have to try it.  The more you buy of it, the more Compass will make of it.  A true beer of the year.  I’m very happy to see that it won a silver award at the SIBA regional last year…whatever won gold must have been exceptional.

Oddly enough I got my bottle from the Burford Garden Centre, which is a turn up for the books and one in the eye for the supermarkets – who still haven’t contacted me with offers of free beers to review.  Unbelievable.