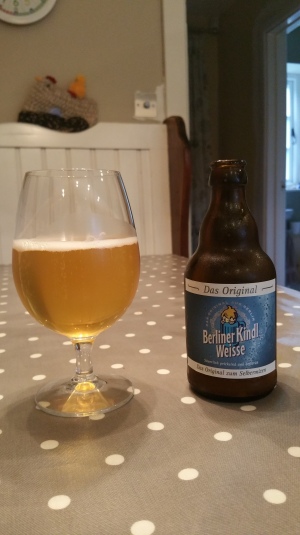 Rarely have I opened a bottle of beer with such trepidation.

Berliner Weisse in its native form is a rare old beast…that’s not to say that the craft brigade haven’t embraced the style as their own, in fact there’s quite a lot of Berliner Weisse tributes knocking about the place.

But I wanted the real thing…

I’ve read about, I’ve looked at recipes for it and I’ve often thought about making it…I just never had the chance to try an example of the Berliner Weisse style.

I found that those lovely people at Beers of Europe (http://www.beersofeurope.co.uk/beers) stock a Berliner Kindl Weisse, so along with a happy batch of other bits and bobs, I received my coveted bottle of Berliner.

To make a Berliner Weisse you need the help of our old pal Lactobacillus (the bacteria responsible for the tanginess of yoghurts, etc.)  Lactobacillus drops the PH of the finished beer sufficiently to give a bracing yet refreshing tartness; this increase in acidity with a standard brewers’ yeast fermentation helps to create a unique and exciting flavour profile.

There’s obviously a lot more to the process – including the potential for a no-boil (!) wort-making step, but we’ll leave that for the day that I get around to making my own version.

It’s a bright straw yellow, with a smallish snow-white head.  Maybe there’s a faint haziness about it, but if there is it’s unremarkable.

There’s a more-than vigorous carbonation, which certainly adds a pizazz to proceedings – small wonder that Napoleons troops called it The Champagne of the North when they first came across it.

The aroma is pretty much devoid of maltiness – OK there’s some sweetness there somewhere – but it’s mainly tart and juicy green apples with  over-ripe pear notes and a faint “sherbertiness.”

In the mouth it’s foamy and lively, coquettishly flirty and tartly refreshing.  The acidity from the lacto fermentation is proper mouth-puckeringly good and there’s an assertive lemoniness with a thin, reedy, maltiness.

There’s no escaping the acidity, and I can guarantee that you won’t have had beer like this before; the front of my tongue sang with it’s refreshing sharpness.

The Germans like to add some fruit syrup to theirs to make it more drinkable – but I didn’t bother because a) I knew it’d probably get up their noses a bit if I had it without and b) I like my Berliner Weisse sharp.