I found these couple of reviews kicking about in my notebook.  I seem to remember them being from sometime around the end of June (which was just before my son was born, so that’s probably why I forgot to upload them!)  These are not full reviews as I’m only going on the notes I’ve got…

My notes also say that these were both part of a Friday lunchtime drink at the Black Prince in Woodstock…and joy of joys they’re both local: Loose Cannon hang out in Abingdon and Vale are based in Brill.  Nice. 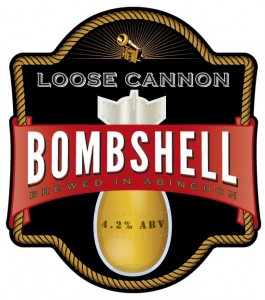 Very light malt but with a really good bitterness and complex hop flavour all meshed under a comforting alcoholic warmth.

Very odd name, and in a similar vein to the bombshell, so it was a little bit of a shame to have the both on the same bill as it meant I had to choose a favourite…and Metroland was mine, but only by a smidge.

Excellent hop aroma, strong clear and bright.  Very evident in the taste too was bright lemon and citrus.  A little more in the way of malt weight than the bombshell which was probably what made it for me.

Very nicely matched malt, alcohol and hop regime leading to a perfectly balanced taste. One of the most accomplished beers I’ve had for a while.