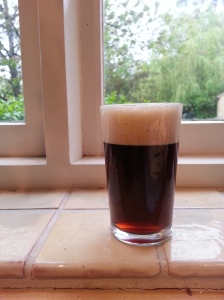 After I read Randy Mosher’s Radical Brewing book I decided that a hop bursted stout would be an interesting experiment and as a result, put together the recipe for this.

When planning the mash I considered that the amount of crystal malt in the recipe would give me a little residual sweetness and would mean that I wouldn’t have to mash any higher than 66C – mashing any higher than that always gives me the jitters and leaves me worrying about finishing gravities of 1025 or more!

For yeast I used the Mauribrew 514 Ale Yeast, and crikey what a belter it is.  It tore through the wort in about 2 days…taking it from 1058 or so to about 1011 in that short time.

Two weeks in the primary and then nearly a month in cornelius keg and it’s finally come into its own: as you can see from the photo, it’s not as dark as I hoped it would be, there’s no way that it’s 94EBC, no way on earth, but it’s dark enough to make a decent porter, so I’m happy with that.

The aroma is complex – coffee, chocolate with a sweet malty sort of nose to it…this is most definitely a sweeter stout, helped in part by the crystal malt, and the taste is kind of where I wanted it to be – echoing the aroma in it’s chocolate and coffee sumptuousness.

There is a bitterness imparted by the hop-charge; but as it’s all late hop additions it’s a weird, graceful sort of bitterness which seems to dovetail right in with the chocolatey-coffee taste – and because of that it’s difficult to tell where the hop bitterness finishes and the crystal and black malt comes in, which is no bad thing…it’s all joined up at least.

The mouth-feel is smooth and satisfying, which means I must have got the amount of oats pretty much bang on…and this helps to keep the finish going on and on and on.

What I’d do differently next time: Less crystal, no hop-bursting (it’s interesting, but I crave a little more assertive bitterness in my brews)  I’ll probably splash out on some roast barley next time to really lay on that dry, roastier feel.  I’ll also whack up the black malt a tad to make it more “stouty.”

This is the second outing with the Mauribrew 514 yeast for me and even though it’s vigorous and dependable in it’s ability to rip through worts, it seems to take an age to clear and isn’t particularly good at staying put in either keg or bottle – the slightest disturbance seems to get it billowing up all over the place.  It also has a weird neutrality to the taste, which I can’t say is unpleasant or anything…it just doesn’t offer much in the way of character.  I guess I’ll be looking to White Labs or Wyeast next time around…

…anyway saying all of that this beer’s satisfying enough as a daily drinker, so here’s the recipe (direct from Beer Engine)