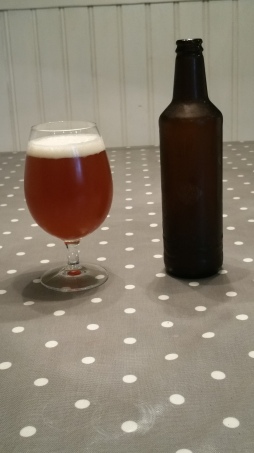 So many of you* have written in to ask how this beer turned out, that it’d be a public disservice if I didn’t write this review.

And god knows it’s nice to hear from people from time-to-time.  Very often blogging is like casting pearls to the wind; and people, that’s one mixed metaphor you certainly won’t have heard before.

(*alright, so it was actually two people: Dan and Simon…but I was very happy to hear from them all the same…)

Anyway.  Here is the post about making the Grapefruit IPA:

Annoyingly, the half keg of it I had kicked half-way through a barbecue, so I had to break out some very nicely-aged Brett Pale Ale instead .  The rest was bottled – which are way more “fridgeable” than the corny keg.

The Grapefruit IPA arrives in a glass with a fearful chill-haze; but, hey, it’s an American-style IPA and they’re always hazy so everyone wins.

The head is magnificently retentive and that’s down to the wheat malt (as is, probably, the chill haze…)

Bear in mind, that because it’s 7.7% it has to be served cold, and there’s no two ways about it:  warm it’s like Gold Label (Barley Wine) from the days of yore.  Cold: it’s refreshing, fruity, zesty and suicidally drinkable.

There’s more than enough aroma, which is all West Coast hops with not so much dankness, but more of the fruitiness and juiciness that I was looking for.

It’s a big old taste, with lashings of warming alcohol, fruity hops and a solid bitterness – after that comes a wave of fairly pokey citrus ‘n’ grapefruit.

All-in-all, it’s just what I was hoping for. It runs the Ballast point Grapefruit Sculpin pretty close – and on that basis alone, I’m happy.

Honestly, it’s the best beer I’ve made this year; and do you know what?  I might end up adding citrus zest to all of my hoppy beers – as the hops fade the zest takes over and seems to elongate the sensation of hoppiness.

Again, as with some of my other beery efforts, those who have tried it have offered to buy it in quantity.  But I couldn’t do that… the thought of the excise men battering down my door in the middle of the night leaves me cold and clammy.

God, I wish very small-batch brewers (i.e. under a barrel – 117Litres per month) were allowed to flog their beer like the cider farmers can.

I’d only sell to make a tiny profit, meaning the rest covered the cost of ingredients and electrics.

Essentially it would mean that I’d be able to do more of what I enjoy, and that’s making lots of beer and have people buy, drink and enjoy it. 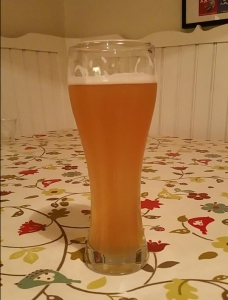 I know the tasting notes for this one have been a long time coming; but the kitchen is in uproar, the heating’s all up the spout and time just isn’t making itself very available these days.

So let’s not faff about and get straight down to business:

Because the temperature where this beer is being stored is so cold, we have the option to drink it with or without the yeast (it’s that flocculent in these coolish temperatures) – so we can have hefeweizen or kristallweizen.  I prefer my wheats “mit hefe” so a pour and a quick twirl of bottle brings the cloudiness up nice.

First off:  This beer is pitifully under-carbonated.  That’s not to say it’s flat…it’s more like the sort of carbonation that I’d expect in a lively real ale – not a refreshing wheat.  But I now know for next time.  Obviously a lack of carbonation does tend to knock the life out of the head a bit, so again I was a bit disappointed…

The aroma is smack half-way between clovey-spiciness and fruity-banana-ishness.  I would have preferred a tad more fruit, so next time I’ll be fermenting a whole load warmer to really encourage the banana notes.

Taste-wise it’s good.  Not amazing, but good enough.  I’m happy enough with it as my first wheat, it’s complex and tastes about right and has a nice enough alcohol hit, but it hasn’t got that wow factor that I was really after.

Next time I’ll make sure that the mash goes better and ferment it just that little bit warmer! 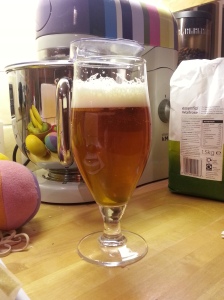 After brewing up this (https://yeastismybitch.com/2014/10/02/home-brewed-fresh-hop-cascade-pale-ale-braumeister-version/) and using the entire hop harvest from my garden, plus another 100g of dried leaf hops, it’s finally ready to drink.

From the keg this beer pours a really lovely autumnal sunny yellow, and is quite clear, too – even with the keg hops.

The head is pure white, sticky, lacy and lasting – pretty much perfect.

The aroma is solid hoppiness: piney, vegetal (it’s fresh hops, remember – they always make things taste a bit “green”) with a good dose of floral too.  There’s hints of the resinous tumult to come, but it’s not the massive hoppiness in the aroma that I was hoping for; saying that of course – it’s way more hoppy than a lot of the beers I’ve eve made, so I really should be ecstatic.

The mouth-feel is nigh-on perfect and makes for a great stage on which the other flavours play out: hops, funnily enough, are to the fore – piney resinous and a great big bunch of fresh cut meadow flowers. This beer is unmistakeably fresh-hopped and is all the more glorious for it.

Towards the end of taste curve comes the bitterness that lays low the hops and allows the malt body to come through.  A refined and refreshing dryness comes in at the very end and prompts the inevitable elbow-bend, sup and head-long charge through hop land again.

Bloody hell.  This is without doubt one of the best beers that I’ve ever made.  All ingredients perfectly in proportion, there’s nothing that I wouldn’t change – especially the palm sugar addition – this allowed the extra gravity without leading to a massive malt-bill cloying sweetness.  Additionally, the keg hopping allowed the extreme hoppiness to continue for longer than ordinary dry-hopping would.

I can’t see how I wouldn’t be making this again next year when the hops are ready.  Speaking of which there’s going to be a lot more hops grown in my neck of the woods next year, oh yes.  Friends have already offered me use of their gardens and farms, etc.

UPDATE: A week or so after writing this and the extreme hoppiness is starting to fade a little – it’s still a beautiful beer, but not as forcefully fresh and vibrant as it was.  Moral of the story: drink hoppy beers quickly!  Speaking of which, if you know me well, why not drop around and help me get through it while it’s still good?!

Sometimes you get an idea in your head of how you’d like a beer to be, even before you get it out of the cupboard and cracked open.

To set the scene: it was a Sunday evening and I was on the hunt for hops.  A quick rummage through my “to be reviewed” stocks turned up this bottle of Malt The Brewery IPA.  An IPA?  Perfect…this is bound to be hop-tastic.  Unfortunately, nice though it was, it wasn’t THAT particular hoppy brew that I was after.

In a glass, MTB IPA is all best bitter brown with a head that zips away fairly quickly.   The aroma is a little bit fruity, almost winey and very malty indeed.  I imagined that I was smelling a lot of crystal malt, but that could be just perception.  One thing I didn’t get in the aroma was the massive hop injection I was hoping for…

The taste was powerfully malty with lots of yeasty fruitiness.  I think I understand why these folks are named “Malt The Brewer”.  To achieve this level of maltiness without straying into that crystal malt cheesiness (I have no other way of explaining it) is a great trick.

If you love a malty pint, you’ll love this…  Unfortunately, again I just didn’t get enough hops to satisfy my cravings.  The mouth feel was spot-on and the and the aftertaste was enduring and satisfying.

To my mind this IPA is a little bit lost in the stylistic no man’s land between ESB and something almost like an English interpretation of a Bock.  But hey, it’s nice enough and you might really dig it if you’re a speckled hen, doom bar, malt-loving type of person…and there’s a load of people out there who are gonna love this beer.

I’d drink it again, but maybe not for a hop fix.  Can we have loads more hops in your next interpretation, MTB?